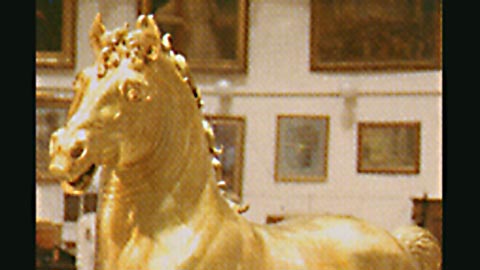 In an elaborate studio setting in the hills of Pennsylvania, history is in the making – again.

Charles C. Dent is creating a horse based on Leonardo's Drawings. The twenty-four foot bronze statue will be presented as a gift from the American people to the people of Italy. Offered to honour the Renaissance master, the people of Italy and the noble horse, it serves as an expression of international peace and goodwill.

As chronicled in National Geographic Magazine, this project is rich in history, international in scope and, as one Leonardo scholar put it, "immensely exciting."

Which rubber compound was used to make the mold of the eight-foot working clay model? Why Smooth-On, of course.

Lodovico Sforza (Duke of Milan), to honour his father Francesco, commissioned a bronze equestrian statue that would stand eight meters (twenty-four-feet) high for his courtyard.

The young Renaissance master, Leonardo da Vinci, accepted the assignment from his patron and prepared for the task by studying equine anatomy, drawing sketches and finally sculpting a working clay model of the horse.

Then came war. In 1499, France invaded Italy and took control of the city of Milan, imprisoning the Duke. The bronze set aside for casting the immense statue was instead used by the Italians to make cannons in defense of their city.

A loss to all humanity, the masterpiece was finished. Until...

Researching the project meant consulting Renaissance and equine scholars from all over the world, as well as reproductions of Leonardo's original sketches of The Horse. These were available through England's Windsor Castle and Spain's National Library.

Dent, with the aid of several artists, sculpted the eight-foot working clay model. After locking in the final lines, the model is finished; the product of over six years of effort.

The next step on this journey into history is for foundry artisans to construct a twenty-four foot clay model. Foundry engineers will erect the massive stainless steel armature that will allow the final bronze colossal to stand on two legs.