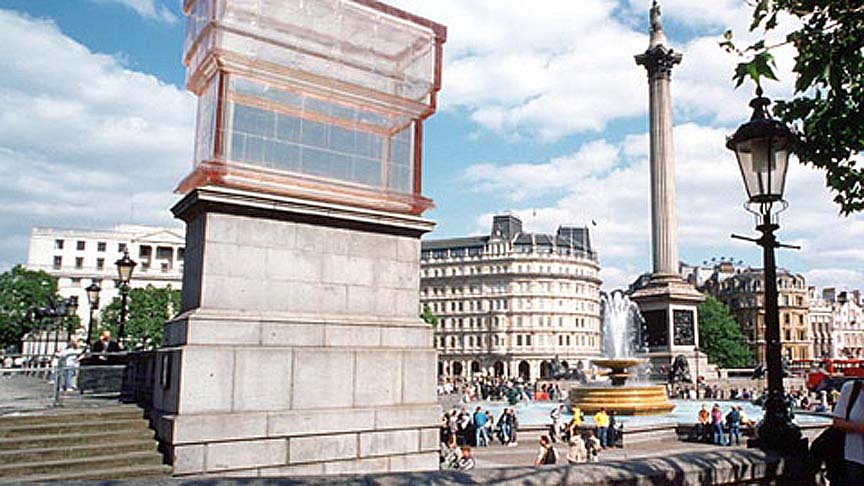 At Over 12 Tons, Could This Be The World's Largest Resin Casting? Possibly.
Crystal Clear Resin? Most Definitely.

Rachel Whiteread is considered by many to be Britain’s greatest creator of public sculptures, with museums and collectors always competing to buy her work. Past projects have been described as “incredibly ambitious” and are almost always controversial. Her decision to contribute a creation to Trafalgar Square’s vacant Fourth Plinth was very exciting and yet posed an array of logistical, material and engineering challenges. Part of Ms. Whiteread’s motivation for doing this project is “to do what, quite simply, has never been done before”.

Backgound - Trafalgar Square is one of London’s top tourist destinations known for its open spaces, crowds and pigeon population. The Square is bracketed by four plinths, or pedestals. Three of the plinths support individual sculpture pieces significant to Britain’s past. The Fourth Plinth has remained vacant for over 150 years due to an inability to agree on what, if anything, should reside there. The Royal Society of Arts recently opened the space for a limited time to support the works of three British artists.

Ms. Whiteread’s vision for the Fourth Plinth was to offer “a pause - a quiet moment” in the bustle of central London by creating an inverse representation of the plinth itself, cast in a water clear see-through plastic.

Largest Resin Object Ever Made - with Ms. Whiteread aiming for an entry in the Guinness Book Of Records, the final casting was to be over 12 tons of resin. This posed a considerable problem in that existing resin formulations of this type gave off a tremendous amount of heat during the curing process, which meant that there was a risk of such a large casting cracking and/or distorting. Smooth-On chemists formulated a special “mass cast” version of it’s Crystal Clear - water clear resin that would not crack or distort, just for this project. After creating several “small scale” maquettes (each maquette was several hundred pounds of material) to test the nature of the final resin formulation, it was time to “scale up” to the large pour.

Uncharted Casting Waters: A Lot At Risk: There could be only one attempt at making this massive pour which was why planning was so important and took over 1 year. Mold engineering and casting were done by Michael Smith Studios (Britain’s top art fabricator). Peter Turnock of Bentley Chemicals (Smooth-On’s representatives in The U.K. tel. 156 251 5121), kept material aspects on track by coordinating communications between parties. In addition to providing the new resin product, Smooth-On also provided equipment used to process the material, as well as on-site technicians to assist with the pour.

Once the actual mixing and pouring began, everyone was on high alert looking for signs of trouble. The only glitch: It was soon evident that volume estimates were short and more material was needed, which could have meant disaster for the project. And how did it turn out? We will close this chronology with a quotation from Ms. Whiteread in an article from “The Independent”, a British newspaper: “Doing What Has Never Been Done Before” - The Reality Sets In.

Ms. Whiteread states that, “I think it is remarkable that we have done it, got this far. I’m totally amazed we have achieved the engineering possible to make this volume of material work. And we ran out of material and had to have it shipped from America. They (Smooth-On) manufactured it and got it to us very quickly. I couldn’t ask for more”.

Quotes take from an article published in “The Independent”, May 2001