How To Turn a Sculpting Talent Into Cold, Hard Cash 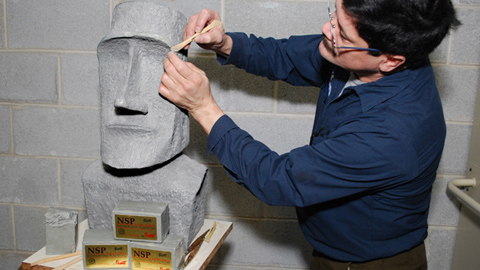 “How Nice Ice” has provided ice sculptures for private parties, professional sports team banquets (such as the NFL Giants and Jets, NJ Devils, NY Yankees and Mets, and more) government functions, country clubs, high-end restaurant buffets and other events since 1999.

Humble Beginnings: Ernesto Escobedo first sculpted an ice fairy for his cousin’s wedding reception in 1995.  From that single event, requests for his creations in ice grew and grew until he was able to quit his job as a print framer for Michaels Arts & Crafts.  A friend of Ernesto’s, who is a butcher, let him use his walk in freezer to temporarily store the ice sculptures. But soon the freezer had more sculpture than meat.

Growing Pains: Ernesto’s sculptures became so popular, that he was able to increase his prices significantly (ten times his original asking price) without hurting demand.  In fact, he was still turning away a lot of business.  The reason: sculpting in blocks of ice (some as high as 6’/ 2m) is very time consuming.

Finding the Way Forward: At the suggestion of a former college professor, Ernesto attended a Smooth-On mold making & casting seminar. With that knowledge, he then developed a plan for production that would let him reproduce many ice sculptures at a time. Instead of sculpting a block of ice, Ernesto sculpted in clay and made a brush-on mold using Smooth-On’s Rebound™ 25 brush-on silicone rubber followed by a Plasti-Paste® support shell.

Ernesto made his first brush-on rubber mold of a peacock sculpted in clay with ornate scroll work, poured water into the mold and let it freeze in his friend’s freezer.  The ice casting was perfect and, through a cousin that works there, he sold the first six to the Waldorf-Astoria Hotel in New York City for Sunday morning brunch at their world famous Peacock Alley Restaurant.  His client list quickly expanded to include the QE II luxury cruise liner when it docks in New York Harbor and New York City Mayoral functions.

Production in Overdrive: Ernesto bought his friend’s butcher shop and converted the entire building into a walk-in freezer for storing molds and making castings. In the winter, he does a lot of casting outside to save space and energy costs. Ice castings range in size from 18” (46 cm) to over 6’ (2m) high.

Ernesto’s mold inventory now numbers in the hundreds and he casts water and demolds ice castings 50 - 150 times per day depending on the time of year.  Spring wedding season is an especially busy time.  “How Nice Ice” currently has nine employees and two refrigerated trucks that deliver to all 5 boroughs of New York City, New Jersey and Connecticut.

Step 1: Constructing a Mold for an Ice Sculpture

Ernesto's ice creation process begins with sculpting an original model in clay. Chavant NSP not only provides great detail to Ernesto's sculptures, it is also sulfur free, meaning it will not inhibit the mold making silicone rubber Rebound® 25. Once the sculpture is completed, Ernesto uses Rebound® 25 silicone rubber to make a mold. Ernesto has been making molds for over 25 years and says that ''Rebound® 25 is the easiest brush-on mold rubber he has ever used and his molds last indefinitely.''

To save money on energy costs, Ernesto moves much of his casting operation outside in the cold winter months and lets Mother Nature turn water into beautiful ice sculptures. Filling this rubber mold takes less than 1 minute and then the water in the mold is left to freeze. A couple of days later, the ice sculpture is ready to be demolded.

It takes at least two people to lift the heavy mold and casting. The bolts in the support shell are removed and the support shell sections are removed one at a time. The mold is peeled back from the ice sculpture like a glove. Rebound® 25 is extremely strong and can be used hundreds of times for this application. The finished ice sculpture is ready for display, adding interest and elegance to any setting.

Ernesto states that his ''mold-related costs for each piece are quickly recovered by selling just a couple of ice castings. My labor costs associated with casting water vs. actually sculpting in ice are cut to a small fraction. And my raw material costs? Water.'' Ernesto states that, ''once the molds are created, there is no limit to what we can deliver.''

Aboard the QE II, ice sculptures add a touch of elegance and a special sculpture design created by Ernesto himslef keeps bottles cool aboard the QE II.