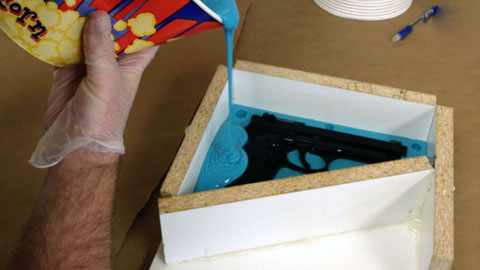 Tripel X had a client that was experiencing unusually high breakage with their gun props. “The script for two consecutive episodes called for weapons to be thrown repeatedly at cops and bad guys on the set. What we were using was shattering”, says Tripel X President, Art Burnette.

Tripel X contacted Smooth-On and was steered towards TASK™ 16. Burnette states that, “the material pigments beautifully, cures quickly and finished castings are absolutely unbreakable. If our film customers are happy, we’re happy. We wouldn’t think of using anything else now”.

Create a mold using Mold Star™ 16 FAST setting silicone rubber. The mold captures all of the detail of the original gun.

Close the mold and place it between two wooden boards. Clamp the mold firmly using a mold strap.

Shake parts A and B before using and then, weigh out parts A and B. TASK™ 16 has a mix ratio of 1:2 by weight. Add a small amount of So-Strong™ black colorant to the part B of the urethane and thoroughly mix into the part B. Combine part A with the pigmented part B and mix the two components thoroughly. Quickly pour TASK™ 16 into the Mold Star™ 16 mold.

After 90 minutes, disassemble the mold. The casting should reflect perfect detail. Trim excess material from the casting. The new TASK® 16 casting is a perfect duplicate. TASK® 16 is flexible and highly impact resistant.

''These prop guns have been thrown against brick walls and on concrete sidewalks many times. They won't break no matter what we do to them'' Art Burnette, Tripel X Props