How To Reproduce a Native American Gravestone 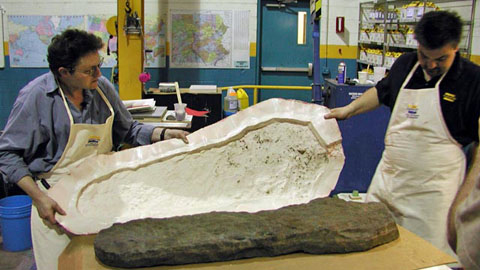 A-B Man was a Lanape Indian native to what is now Northampton County near Allentown, Bethlehem, and Easton, Pennsylvania. He lived from 1704 – 1804 and is the only known Lenape Indian Revolutionary War veteran buried among 282 veterans in the county.

“At the age of 75, he carried messages for General George Washington and served as a scout in the Revolutionary Army”, said Donald R. Repsher, a retired Presbyterian minister of Moore Township and amateur historian. "When he reached [General John] Sullivan's army [in 1779], he joined others of his people who were scouting and protecting the army from being caught and attacked. He was probably about 5-foot 8-inches, tough as nails, even at the age of 75," Repsher said.

“As he neared the end of his life, he carved his own gravestone which was customary at the time. He included symbols that are deeply personal to his own life and probably unknowable to others. On the stone are several pictographs including a turtle, an eagle with spread wings, an image of an Indian man and a line drawn from a medicine wheel that may represent the doorway between heaven and earth.”

The original gravestone has stood at A-B Man’s grave since his death in 1804. After standing for more than 200 years in the elements, Man’s original carvings were worn away and were barely recognizable.

Northampton County officials wanted to make a reproduction of the headstone for display at a local museum and were given permission to take it off site to have a mold and casting made. They contracted the services of Chris Blumquist, a local professional mold maker.

To follow is a chronology of the mold making and casting process.

The gravestone is first sealed with Sonite Wax®. Paper is then cut and placed on top of the water-based clay platform to protect the mold rubber from moisture. Oil-based clay is used to form a seal around the edge of the gravestone. Universal® Mold Release agent is applied over the entire surface.

Step 4: Applying Molding Material and Support Shell to 2nd Side of Model

The Mold is flipped over to expose the other half. The clay is removed and cleaned thoroughly, and the surface of the stone and the flanges of the mold are coated thoroughly with Universal® Spray Release. The same procedure is repeated for the second side of the mold and mother shell. Metal conduit is used again in the construction of the support shell.

Material is brushed into both halves of the mold and the mold is put back together and strapped tightly. SmoothCast® 320 resin is mixed with pigment. Then, the resin is poured into the mold to give a ''back coating'' providing additional strength and also to adhere the two halves. Finally, the mold is rotated to distribute the resin evenly.

Smooth-On's Joe Domic (left) and Aura's Chris Blumquist (right) display the final casting. Brown stain is applied to give the casting a more realistic appearance, and to enhance the detail. The enhanced casting makes it easier for an 'untrained' eye to appreciate the detail. The replica is found on the left and original gravestone on the right of the final picture.